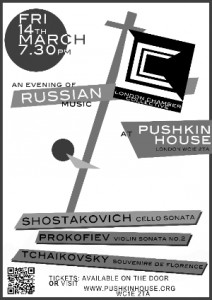 Do you think we’ve finally made it to spring? Can it be?  Has it really stopped raining?

Thank you so much to everyone who came along to the Jacob Barnes Scholarship Fundraising Concert for MusicWorks chamber courses on Sunday 23rd February.  The evening was so special, and stonking performances of works by Dvorak, Strauss and Gliere went down a storm!  It gave all those of us who were lucky enough to know Jake a reason to come together to play, and to remember his inspirational spirit.    The concert has raised nearly £2000 for this year’s scholarship – deepest thanks to everyone who contributed.

Since September, I’ve started working with the London Chamber Collective.   Made up of Amy Tress, Alanna Tonetti-Tieppo, Felicity Matthews, Paul Beckett, Auriol Evans, Anyssa Neumann and myself, the ensemble currently comprises a complete string sextet and piano.  This gives the possibility of covering a vast majority of the chamber music canon.  Our first concerts in autumn 2013, focussed on works by Brahms and Schumann.  Currently we are rehearsing a programme of Russian music.  Anyssa and I will be playing Shostakovich Cello Sonata, followed by Amy and Anyssa with Prokofiev Violin Sonata No. 2.  Tchaikovsky’s Souvenir de Florence takes up the second half, a piece of epic and ebullient proportions!   This concert has its first outing at Pushkin House, London on Friday 14th March, with further dates on March 26th at the Norden Farm Arts Centre, Maidenhead and on May 9th at the Vera Fletcher Hall, Surrey.

The ensemble has had a terrific inaugural season so far.  Later in the spring and early summer we’ll be playing at St Martin in the Fields, Blackheath Halls and The Elgar Room at the Royal Albert Hall, and the ensemble will be in residence at the Sevenoaks Music Festival in June.

I hope you can join us for some of these concerts – rain or shine!

Leave a Reply to philip carne